Written by Melinda A. Gaboury, CEO
Posted in Hospice Cap Requirements
May 23, 2017

Over the last few weeks there have been updates that hospice should be aware of:  the 2017 Final Rule has been issued and Medicare MACs have finally acknowledged that the new payment rates for Routine Home Care and the Service Intensity Add-On have not been paid correctly in all situations since January 1, 2016.

The key highlights from the 2017 Hospice Wage Index and Rate Update include: 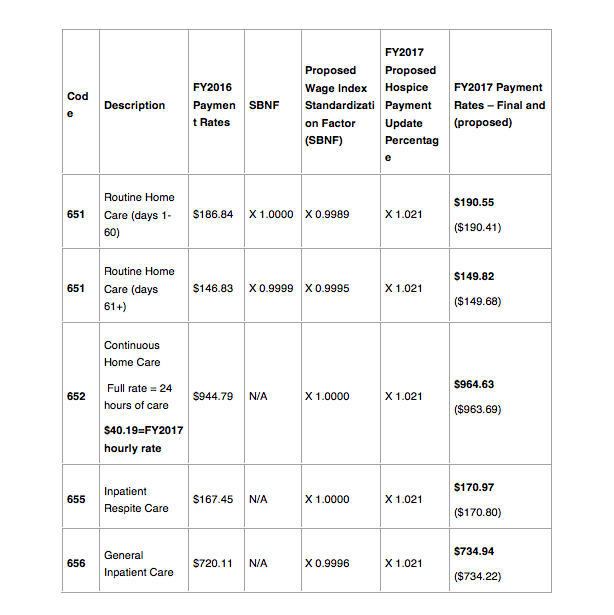 1.    Hospice Visits When Death is Imminent– assessing hospice staff visits to patients and caregivers in the last week of life; and
2.    Hospice and Palliative Care Composite Process Measure– assessing the percentage of hospice patients who received care processes consistent with existing guidelines

Hospice had some significant changes in payment structure that went into effect January 1, 2016. There have been payment discrepancies identified and following are updates from the Medicare MACs regarding these adjustments.  Agencies need to be confirming payments when received and tracking the ones that are not paid correctly initially so that when they are corrected the agency can insure that all were paid correctly.

An issue has been identified with the two separate payment rates for RHC services on and after January 1, 2016. On some claims, the high rate is populating on the claim for the RHC days when the low rate should have been applied.

Impact to Provider:  Overpayments have occurred on certain claims.

Medicare Administrative Contactors are adjusting hospice claims to correct payment for dates of service on or after January 1, 2016. All adjustments to correct these two problems shall be completed in the next 90 days. Hospices do not need to take any action.

Service Intensity Add-On (SIA) Payment
Issue: In certain situations, the Medicare system is not applying the end-of-life (EOL) service intensity add-on (SIA) payment to the previous month’s claim, when a patient dies within the first few days of a month. The Medicare system is designed to trigger an automatic adjustment of the prior month’s claim if the prior month’s claim is eligible for the SIA payment. This adjustment will apply the EOL SIA amounts to the previous claim that could not be identified in the initial processing. These adjustments are not occurring on the prior months claim in the following situations:

CMS is aware of the issue and the MACs anticipate instructions from CMS in the January 2017 release to correct the Medicare system issue.