Written by Melinda A. Gaboury, CEO
Posted in Hospice Regulation & Compliance
May 23, 2017

The FINAL Hospice Payment Rule was released on July 31, 2015 and addresses payment reform of the routine home care (RHC) level of care by providing a payment of two separate rates. One rate will be for care provided from day 1 through day 60 of an episode of hospice care and a second rate for days 61 and later. Be sure to understand that the counting of days continues into care provided by a different hospice unless greater than 60 days has passed since the patient revoked or was discharged from the previous hospice.

One of the most comforting pieces of this regulation is that the new payment structure will not be effective until January 1, 2016, allowing systems time to prepare to deal with these changes.

CMS has allowed for a Service Intensity Add-on (SIA) that would be added to RHC payment for Registered Nurse (RN) and social work visits provided during the last 7 days of life. This proposed change, SIA, appears on the surface to be a great change, but will the adjustment amount be adequate and why will it not be extended to patients that are requiring these services in a nursing facility?

The SIA would be applied if the following criteria are met:

The proposed SIA would be equal to the Continuous Home Care (CHC) hourly payment rate multiplied by the amount of direct patient care provided by a RN or social worker for up to 4 hours total per day, as long as the aforementioned criteria are met.

The charts below represent the FINAL 2016 payment rates for CHC, IRC, and GIP and the two rates for RHC. These rates would be reduced in cases where hospices fail to meet the quality reporting requirements applicable to the 2016 payment update year; the rates also do not account for the sequester. 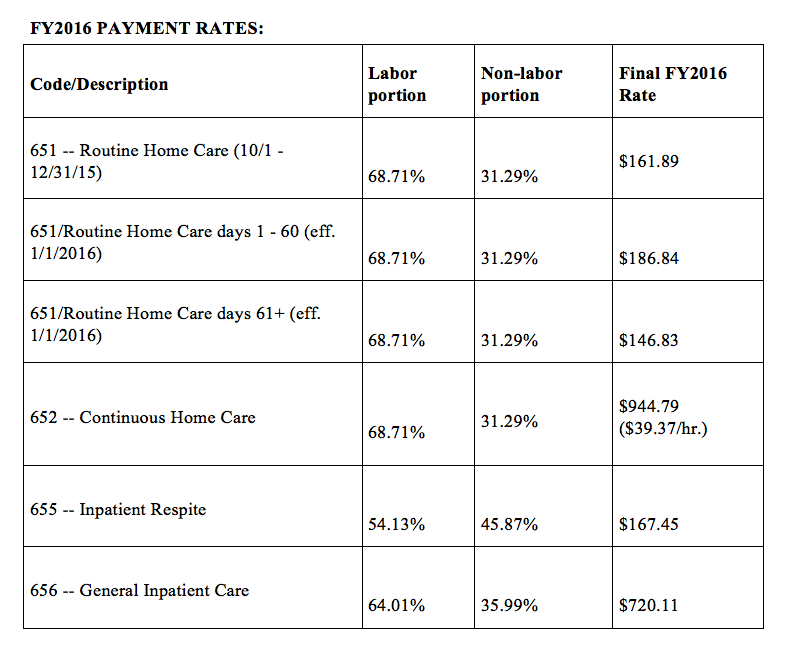 The wage index rates for 2016 reflect the full phase-out of the Budget Neutrality Adjustment Factor (BNAF), along with annual changes to the wage index values.

The HPS Blog for next week will discuss the other components of this final rule, including HQRP and the CAP calculations.

The Final Regulation can be found at the following link: